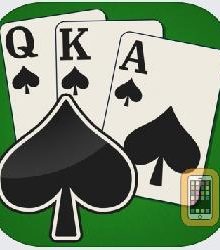 Do you play cards? One of the first computer games that I played a lot was the game of solitaire. Since then, several other card games have appeared on PC, then on phones.

Often, card games for mobile are not very interesting because the cards are too small and they can hardly be handled. This is not the case with Spades Card Game, by MobilityWare.

The creative team understood that the important thing is fluidity. In a simple card game, we don’t need animations that take up energy or slow down the game. We want speed. And that’s what this game offers.

The game is simple: 2 teams of 2 players compete against each other until one of the two teams reaches 250 points. Although the game requires 4 players, this is a single user game. As the player earns points, they level up and acquire titles. It adds a little something since it gives the impression of progressing towards something.

Like all free games, there are obviously advertisements. But, pleasantly enough, the ads only last 5 seconds or less.

In the end, Spades Card Game is a good little card game for smartphones.