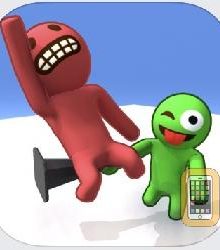 Mobile games are very popular these days. People mostly look for games that are simple, low on intellect and take up little space on their device. For this very first mobile app review, I tested What The Fight, by VOODOO.

What The Fight is a free app, with built-in ads. As is often the case, there is a banner at the bottom and videos to watch after each battle. And bonuses are offered to players who watch additional advertisements.

What is the game about

The game is simple: by sliding your fingers on the screen, you make your little guy (a rag doll) move. You must rush onto your opponents to make them lose life points. You can also pick up objects (by running into them) to beat up the other little guys with them.

The game is pretty fun, but you get through it pretty quickly. Let’s say a few more options would be welcome. I wish I had more control over the hits my character gives.

This being said, the game may appeal to younger users. Its simplicity might make it popular.